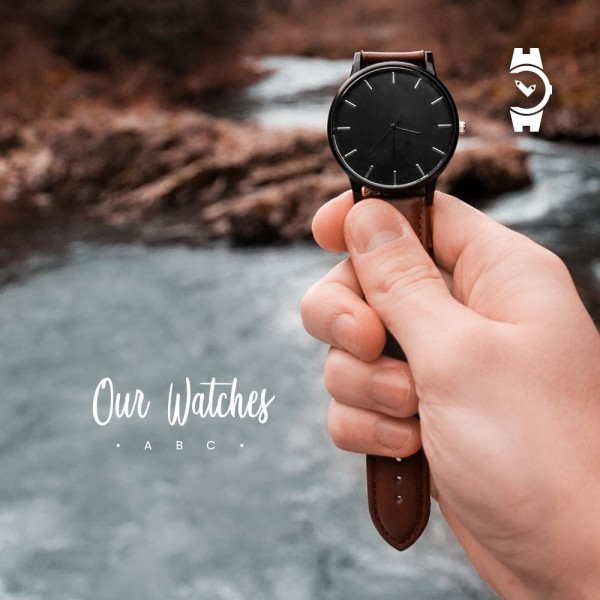 May we introduce? The new blog format of WACCEX: Our watches ABC - special terms explained. We explain technical terms around the topic watches. Starting with a.m. up to the time zones - everything included!

The abbreviation a.m. stands for the period from midnight to noon. When written out in full, the two terms mean ante meridiem, which means as much as before noon.

In an analogue display, the time is represented by hands on a dial.

A bridge movement of a watch is a mechanical movement with manual winding. The gear train is connected to the plate via bridges.

Watch movements with a bridge movement stood for quality for a long time. Due to the continuous development, modern movements now have very compact versions. The importance of bridge movements in wristwatches is therefore almost completely extinct today.

The term chronograph is derived from two Greek terms: chronos stands for "time" and grapho for "I write". In 1821, the Frenchman Rieussec invented the first chronograph, for which he applied for a patent a year later.

A chronograph is a mechanism in which the pressure of one or two pushers attached to the case of the watch sets its own hand in motion and can be stopped again. With these pushers the hand can also be reset to zero. This function can be used to stop lap times, for example.

Time spans from one minute up to 12 hours can be measured, depending on the technical equipment.

Chronometer simply stands for "timepiece". A chronometer is a particularly precise watch with absolute accuracy. In other words, a watch that displays the time with particular accuracy.

After a special test, in which the watch has to prove its accuracy, it receives a so-called rate certificate. This test takes a total of 15 days. The watch is tested in five positions and at three different temperatures. After passing the test, the watch receives the corresponding certificate and is allowed to call itself a chronometer.

The spring-bar buckle is the classic among the types of fasteners for watches. Holes are punched in the longer side of the bracelet, whereas the spring-bar buckle is located in the shorter band. The buckle consists of a pin and a U-shaped metal clasp. The thorn is pushed into the desired hole and the metal shackle prevents the thorn from slipping out of the hole again.

The most commonly used buckles are those of leather or textile watch straps.

With a perpetual calendar in a watch, the day, day of the week, week counter, month, season, leap year display and moon phase are accurately displayed over the years. However, the even and odd months as well as the leap years are not taken into account.

The time calculation goes back to the Gregorian calendar. According to it, the year has 365 days, 5 hours, 48 minutes and 46 seconds. According to this calculation, therefore, about 5 hours are lost. In order to compensate for this time, a leap year is inserted every 4 years, which compensates for the loss.

To integrate the perpetual calendar into the precise technology of a movement is therefore anything but an easy task!

With a deployment clasp, the bracelet is not opened completely, but is unfolded and expanded at hinges. This is also the advantage over a pin buckle. This is because with a folding clasp there is no risk of cracks occurring due to frequent putting on and taking off the watch.

The deployment clasp is often found on metal link straps as a closure type.

In 1906 the Brazilian aviation pioneer Alberto Santos-Dumot developed the first pilot's watch. These watches had very precise mechanical movements and were built robustly and shock-resistant. Thanks to the large, easy-grip crown, the watch could be adjusted and wound even when wearing gloves. The pilot's watches were constantly developed further and are still of great importance for pilots today.

The term accuracy describes the time deviation of a watch within a certain period of time. The amount of deviation is also called rate error. Accuracy is very important for the various technical processes to function synchronously. Different watches have different deviations. For example, an automatic watch has a rate accuracy of +/- 30 seconds per day. An atomic clock, on the other hand, only deviates by one second within 30 million years.